Looking at what’s being said, not just who is saying it (how many times)

When people talk about media analysis, they’re normally discussing results measurement – figuring out what impact they’ve have had and proving it to their clients.

But considering the amount of time and resources that go into creating a brand identity, there is surprisingly little listening done in advance, before brand books are signed, sealed and delivered.

Imagine, for example, that you are at your local pub and you overhear people talking about your company and its competitors. Without a doubt, you’d be most interested in what was being said, not just who was doing the talking or how many times they mentioned each product or competitor. You might also notice their overall tone, of course, or how much of the conversation was focused on which company, but you (and your boss) probably want to know how, in this conversation, each brand is described.

The same principle should be applied to media analysis. So much of our industry focuses on “how good” the conversation is, overall, or “how much” of it there is. But media analysis can also delve into what, exactly, is being said. That can help you clarify errors, affirm and repeat positives, and share your perspective. You can also compare the ways that your company’s perception (what people think it is) is different from its projection (what you are saying it is)…and hopefully, you would use this information to make decisions about how your organization should act next.

When the conversation you’re “overhearing” is actually the sum total of newspapers, blogs, message boards, Twitter, and the TV – well, you have to boil it down quite a bit to understand what’s going on.

One way to do that is to look at which messages are unique to each company, and which are shared.  Check out this graph – and if it gives you flashbacks to middle school, I’m really sorry. It’s a Venn diagram that looks at the unique and shared positive messages in a media collection describing three retail clothing stores (names have been changed). 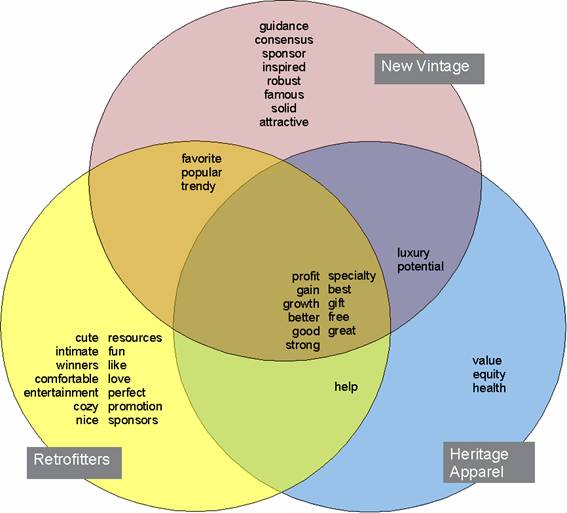 You can see right away that the conversations are really quite different. In this conversation, “Heritage Apparel” was the least unique; it has the most generic of the brand identities.  But it also means that “Heritage Apparel’s” identity is similar to the overall competitive landscape.

On the other hand, “Retrofitters” owns the most unique messages. It has a fairly strong brand identity in this conversation. And some of its messages – it was the only one described as “cute,” for example – are really nice to own.

“New Vintage’s” image is different. People are using words like “inspired,” “famous” and “attractive” to describe it. It also is more often described as “favorite,” “popular” and “trendy” than Retrofitters.

Here’s another example – one with a more political application.  This Venn shows how different media groups describe controversial Venezuelan president Hugo Chavez.  Rather than comparing him to his competitors (seeing as how he’s president-for-life), it compares the conversations happening in different parts of the world. These are only the negative messages: 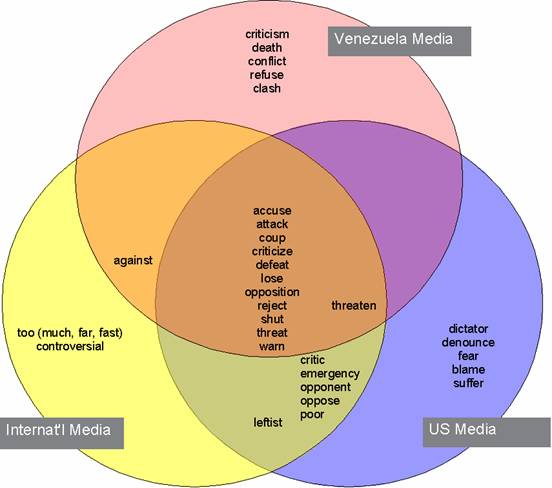 The coverage we get can vary wildly, depending on the perspective of the publication. Hugo Chavez very much embodies this. The entire community agrees on the facts – the study was done in November of 2007 when Chavez advocated for a referendum to allow him to run for president indefinitely, froze diplomatic relations with Columbia, and accused the CIA of orchestrating a coup.

The Venezuelan media focused on the events in the country.  They acknowledged “criticism,” the “conflict” between Venezuela and Columbia, and a “clash” between pro- and anti- Chavez protestors.  US media used significantly stronger language, with messages like “dictator,” fear” and “suffer.” The non-US International media was considerably more cordial, describing Chavez as “controversial” and saying he was going “too far,” “too fast.”

When you look at what’s being said (rather than how much is being said) you can position your brand image in a way that is unique and relevant.  Join the discussion: how would you use this data? What would you do if you were each of the clothing retailers? How would you advise Hugo Chavez?

2 thoughts on “Media Measurement: Focusing on What’s Being Said”